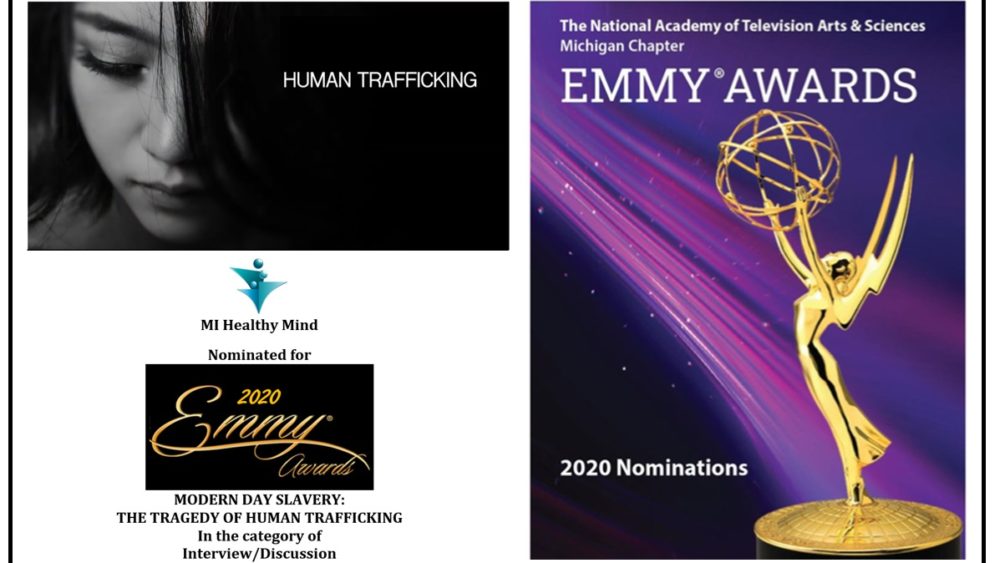 MI Healthy Mind is Nominated for an Emmy Award

We are honored and humbled to be nominated for an Emmy Award in the Interview/ Discussion Category for our Human Trafficking episode.

This powerful episode shares the story of Joyce Dixson Haskett, once a victim of human trafficking and now a passionate advocate for those still in bondage, and clinical social worker/ therapist. “Victims of human trafficking are groomed for that life. Since human trafficking is often a crime that is hidden in plain sight, it is important to be aware of its warning signs. We need to train our children what to watch for. Human Trafficking is in our schools, in parking lots waiting for kids…from Detroit to Birmingham,” Joyce tells us.

The National Academy of Television Arts & Science, Michigan Chapter, or NATAS Michigan describes its role as being the, “standard-bearers for excellence in the television broadcasting industry and the gatekeepers of the prestigious regional EMMY® Awards in Michigan. The Michigan EMMY® represents the most experienced and talented television professionals from all disciplines of the industry and from all of Michigan’s 11 television markets.”

We at MI Healthy Mind are ecstatic to be recognized by such a prestigious academy. Our hard work is done to help stop the stigma surrounding mental health issues. Our slogan, “Let’s Talk About It!” is an everyday reminder to each of the members of staff that the work we do is helping to promote conversation, support and a more accepting environment for the one in five Americans suffering from some form of mental health issue.

Thank you to our viewers and supporters who, by supporting us, are part of this important movement to destigmatize mental health issues and create a more accepting, welcoming future for all. We would also like to thank Joyce Dixson Haskett, and the other heroes of our episodes, for bravely sharing her story of triumphing even in the face of daunting odds.

The 42nd Emmy® Nominations will be announced Wednesday, May 20th at 10:00am on their Facebook page (@NATASMichigan).